I know; it’s late again. But, I do have a very, very good excuse this time. In fact, I think it would have to be the best excuse…ever! I actually have a full time job. Boom. How’s that?

Last time we spoke, I’d literally just been offered my new job. To say I was ecstatic would have been an understatement. The searching was finally over and I would actually be earning some ‘real’ money. Since then, I’ve been in my new post for a couple of weeks, and apart from being bombarded with a vast amount of information, I’m settling in to my new surroundings at the University of Birmingham quite nicely.

You may be wondering just what my new role entails, well, I shall explain. The Creative Media department at the university deals with the printing of all the literature for all the many faculties on campus. Prospectuses, leaflets, banners, brochures, the lot. You name it, we probably print it. I’m the one who replies to the emails, answers your phone call and more than likely greet you if you come to reception. That sounds like I may not say hello if I don’t like the look of you, but what I actually mean is that I’ll try and help you unless someone else beats me to the desk! So, if you ever have to ring the Creative Media department, please, be nice.

It’s been a busy two weeks, hence why this post is slightly later than I had originally planned. I have to the say getting up at half 6 in the morning and arriving home at 6 in the evening five days a week certainly takes it out of you. By the time I’ve had my tea and watched a bit of TV, I’m ready for my bed. Two weeks in and I’m already treasuring my weekends. But yes, I am enjoying it; being the new guy not knowing very much when people ask you is a little unnerving, especially as I’ve gone from knowing pretty much everything at my old job to nothing at all.

Your first picture of the month is one I took on about night 10 (slight exaggeration!) of watching the International Space Station fly over head. I’ve been rather interested in the stars, planets and our universe for a number of years now (you have Brian Cox to thank for that!) and Twitter was very helpful in keeping me up-to-date with the visible sightings of the ISS throughout April. I was pretty much out most nights and after a number of attempts, managed to capture the space station flying over head. It’s not as spectacular as some of the images I’ve seen, but I’m pleased with it all the same.

I’ve written this post in two parts, taking a break of about a month in-between. But now, four weeks later and I thought a Bank Holiday Monday would be a good time to wrap things up.

5 weeks of early mornings and long days has meant there’s been little time for much else and my weekends have all of a sudden become sacred. This weekend though, the second three-day weekend I’ve had since staring work (picked a good time to start I think!) included a visit to the Beach. Now you’ll know from my 365 last year that I’m a big fan of the beach and the sea, so it was quite nice to get a sunny day in Barmouth.

It’s been 18 months since we visited last which seems ages considering we used to go every year for a holiday when we were younger.

Our day began with a leisurely drive and upon arrival, a full English breakfast at Davy Jones’ Locker. You can’t beat it. Suitably set up for the day we headed to the beach. The weather was glorious. Jack enjoyed his endless walks to the sea and back and we enjoyed sunbathing, looking around the shops and playing games on the beach. We rounded the day off with fish and chips on the seafront. Traditionally, we buy our chips and drive a couple of minutes down the road to a lay-by  overlooking the beach to eat them, but on this occasion the weather was too nice to pass up eating them on the front.

We were all suitably shattered after our day, but it was one that very much enjoyed, needless to say, Jack slept for most of the journey home.

No surprises then for guessing that the remainder of the post will include some sunny pictures from Barmouth – hopefully it won’t be another 18 months until we visit again! 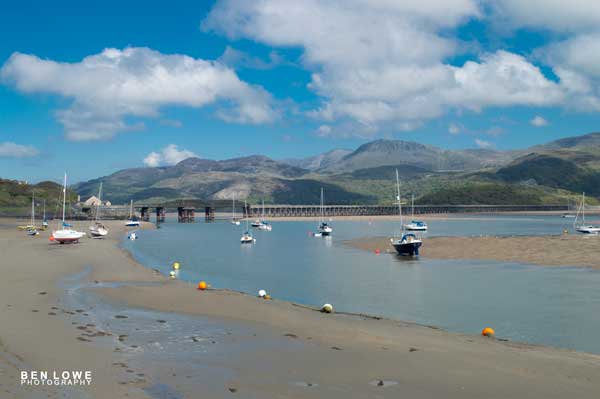