Well, hello to you!

Have you missed me?

Call it withdrawal symptoms if you like, but I just couldn’t help write a post and bring you up to date with all the exciting events in my life. you know, the ones that you’ve all come to know and love. (Just to warn you, there’s quite a lot to get through – now would be a good time to grab a cuppa and a biscuit before you get too comfy!)

It’s the middle of January and most of the New Year resolutions I made haven’t quite kicked in yet. One of them was (is!) to lose a little bit of weight, and get fit. I was astonished to discover I’d put on about 7lbs over Christmas! For a guy that’s always been rather slim, it was a bit of a shock. The bike will definitely be coming back out over the next few days or so. That, along with the new treadmill the family has purchased.

At the time of writing this, it hasn’t arrived yet, but it is on its way, ready to take up its new residence in our rather chilly garage. That place, unfortunately, is where exercise equipment comes to die. In fact it’s where most things end up that we don’t want to play with anymore; well, there or the loft.

We’ve got quite a collection in there at the moment; my weight machine that I used for a while and then got bored with is one of them. I think I burnt more calories actually putting the thing together than I did using it! Second is our rowing machine which to be honest is earmarked for eBay, I just haven’t got round to listing it yet. You know you always have that little niggle in the back of your mind that says “I will use it one day!” Finally, completing the lineup is our walker which was originally living in our front room – the idea being that you could get fit whilst watching the TV. That didn’t last long. Soon it too ended up unused in the corner and was eventually banished to the cold room to sit in the dark.

Honestly, we don’t buy these exercise machines just to love them for a bit and then torture them for the rest of their days, it just happens that the only room we have any space for them also happens to be the coldest one in the house; not the best place for doing exercise. When it’s cold and frosty outside like it is today, that’s the last place you want to be!

I know the question on everybody’s lips must be “am I missing Project 365?” (Ok, maybe it wasn’t but just pretend it was otherwise this next paragraph won’t work…)

Well, I’m glad you asked actually. Honestly, I have to say I’m torn (I won’t burst into song there – Natalie Imbruglia’s 1998 hit comes to mind) I’m not missing the panic of trying to find a picture and write about it, especially on the days when I run from one job to another, not that that’s happened this year yet…(it may do before this is published, I’m writing this over a couple of weeks). On the other hand, I am missing sharing all my news with everybody out there in cyber space. I’ve so many people (ok a few) say that they’re really missing reading my daily posts and I think in a way I do feel a little lost not really having a particular reason to blog anymore. But, I enjoyed last year so much that I am going to keep blogging, just not quite as often at the moment. There are plans to do another photo project at some point in 2013 so of course you’ll be the first to hear, and who knows, we might end up posting daily again at some point!

You’ll remember that last year I had a telescope for my birthday, and you’ll probably also remember that I promised you some astrophotography. Sorry, I’ve not got any yet, but there is reason for me bringing this up again. Last week, the annual TV series Stargazing Live returned to our screens for three nights with Professor Brian Cox and Dara O Briain. I find anything to do with the solar system and our planet fascinating so naturally I was glued to the TV. The iPad I had for Christmas really came in handy when I missed Wednesday night’s instalment due to work and watched in on iPlayer instead! There were some stunning images of stars and galaxies featured on the show and it’s really re-fuelled my desire to try and capture my own. And now that I haven’t got the pressure of posting everyday, I can spend a little more time creating exciting images.

Since the end of 365, I’ve been busy compiling the much anticipated Project 365 book. It’s almost done and I’ll be able to send off for my proof copy soon. You’ll remember I showed you the working front cover design in September last year; well, it doesn’t look like that anymore. It’s changed ever so slightly, the final version can be seen on my Facebook page if you’re interested.

In the news lately, disappointment as camera chain Jessops goes into administration. It’s such a shame to see a vast number of well known chains disappearing from our high streets. I’ve always turned to Jessops for information on cameras and lenses and it’s where I bought not only my smart Nikon 1 last January, but also my Nikon D3200 in August. Fingers crossed that someone will step in and save such an iconic company. (Since originally writing this, sadly Jessops is no more. Two days after going into administration, all it’s 187 shops were shut).

HMV is the latest victim, calling the administrators in on Monday this week. It’ll be a shame if they go, it’s the one place you can actually go and look at a range of physical music and film items. It’s something I love doing, just browsing the shelves. Admittedly, unless I’ve got a gift voucher (thank goodness I didn’t have any for Christmas as they’re not accepting them at the moment) I usually buy elsewhere because HMV has a very strange pricing scheme. I shan’t go into it, but basically everything is way to expensive, even stuff that’s been out for ages. You’ll even find newer DVDs cheaper than older ones. No wonder they’re in trouble. But I do hope someone steps in and saves them, we can’t lose two iconic high street stores in one month!

On a different note, I almost feel obliged to tell you what I’m reading at the moment. I’m sure it wouldn’t surprise you that I’m still working my way through Bear Grylls’ autobiography. I say working through, I’m no further forward than when I mentioned it last time, whenever that was. Way before Christmas, I know that much.

Finally, the job hunt – ‘cuz I know how much you want an update on that. Well, some progress this week in the fact that I’ve applied for some more, but other than that nothing much to shout about. Although saying that, Groupon came to my rescue last week offering a Microsoft Excel course at the bargain price of £19 which I snapped up. I’ve seen them on there before but never bothered, but this time I thought I’d give it a go. A lot of the jobs I’ve seen are asking for people who know advanced Excel. Well, I haven’t used it since I was in secondary school – can’t stand the programme. My hatred for it is almost as bad as what I feel for MS Word when I’m trying to put tables and graphs on a page and it moves everything down when I press enter. I mean, what’s all that about? Why can’t stuff stay where I put it? Anyway, sidetracked…erm…yeah I don’t like Excel much but I thought if I can learn how to use it properly I may grow to love it, especially if it helps me get a job. And who van grumble for a quid short of twenty!

I think that’s it. I suppose it’s customary that I reward your perseverance and your eyes for struggling through all that text to the bottom of this post. If of course you’ve skipped it all and come straight to the pictures, then shame on you 😛 Saying that, I don’t know why I’m bothering to write anything about it here, you’re not likely going to randomly read the last paragraph are you. As you were…

Down to business then, and what visual lovelies do I have for you to feast your eyes on. The theme is a frosty morning, as it was today, and stupidly I thought I’d venture outside in my PJs and dressing gown (just in case the ice melted before I was dressed) to take a few pictures. I ended up spending I don’t know how long out there, but did manage to amass a selection of images. 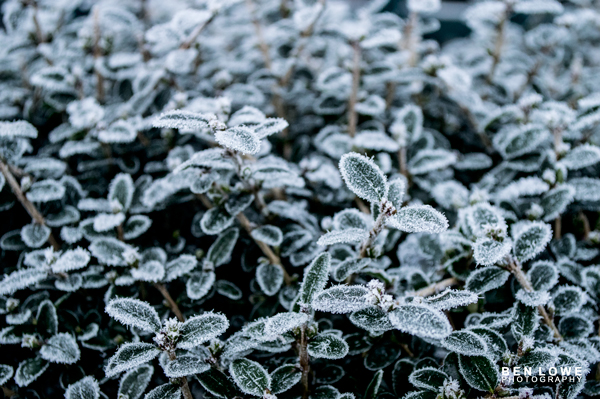 There you go, that’s calmed my cravings for a bit – don’t forget you can get my blog delivered straight to your inbox by subscribing at the top of the page.